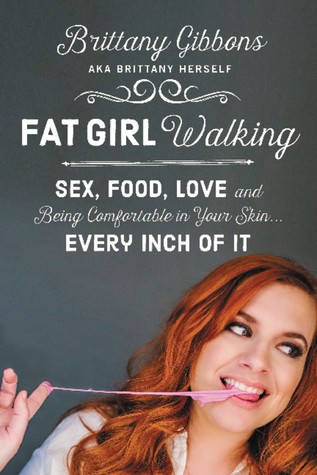 Told through a series of larger-than-life snapshots, a hilarious memoir in essays about love, sex, marriage, motherhood, bikinis, and loving your body, no matter what size you are from the acclaimed blogger and body image advocate.

Brittany Gibbons has been a plus size her whole life. But instead of hiding herself in the shadows of thinner women, Brittany became a wildly popular blogger and national spokesmodel–known for stripping on stage at TedX and standing in Times Square in a bikini on national television, and making skinny people everywhere uncomfortable.

Talking honestly about size and body image on her popular blog, brittanyherself.com, she has ignited a national conversation. Now in her first book, she shares hilarious and painfully true stories about her life as a weird overweight girl growing up in rural Ohio, struggling with dating and relationships, giving the middle finger to dieting, finding love with a man smaller than her, accidentally having three kids, and figuring out the secret to loving her curves and becoming a nationally recognized body image advocate. And there’s sex, lots of it!

Fat Girl Walking isn’t a diet book. It isn’t one of those former fat people memoirs about how someone battled, and won, in the fight against fat. Brittany doesn’t lose all the weight and reveal the happy, skinny girl that’s been hiding inside her. Instead, she reminds us that being chubby doesn’t mean you’ll end up alone, unhappy, or the subject of a cable medical show. What’s important is learning to love your shape. With her infectious humor and soul-baring honesty, Fat Girl Walking reveals a life full of the same heartbreak, joy, oddity, awkwardness, and wonder as anyone else’s. Just with better snacks.

As you probably know from my previous post, and interview with Brittany Gibbons, I have a super girl crush on her!  This book is for every woman.  Not just us fat girls.  It is for everyone who has ever looked in the mirror and not loved what she saw.  It is for everyone who untags Facebook photos of themselves.  It is for every woman who has been made to feel like less than who she really is, because other people are assholes.  Brittany has been there, and she has grown from it.  As soon as I got the book and started reading, I could not put it down until it was over.  I kept laughing and my husband repeatedly asked “good book?” OMG Yes!  It really fucking is.  It is hilarious and real. This book gets super personal.  She shares stories about her parents, poverty, and periods.  She talks unabashedly about sex with her husband and what a train wreck she was when she was alone in college.  The book touches on mental illness, eating disorders, and bullies.  It really takes you everywhere in her life.  No topic is off limits.  Everything is told in a humorous and honest way, that you can’t help but love.  I could relate to SO MUCH in this book.  I too was bullied, struggled with eating disorders, and begged my parents to home school me to get away from the terror that was school (they said no.)  I felt such a relief reading this book, because it just feels good knowing that you are not alone.  I wish I had this book when I was a teenager. It would have really helped. Fuck, it helps me now.  I still struggle with body image, and I feel uncomfortable being naked in front of my husband (we’ve been together for 9 years.)  I’m going to make changes though, because of this book.  I am going to try and do what Brittany did.  I am going to try to say 3 positive things to myself in front of the mirror, and do it until I believe it, even if I feel silly at first.  She changed her outlook, and so I can I.  She went from hiding her body from the people she loved to stripping down to a bikini in Times Square, on national TV, and for TedX.  She says “Curvy women want to be reassured that they were allowed to both love and hate parts of their body and at the end of the day, still have worth.” and she is accomplishing that.  A lot of this book is about her being a mom, and how this changed her body, and her outlook.  I can’t relate to this not having children myself.  I thought I would be uncomfortable reading about that part since I can’t have kids, but it isn’t the focus of the book, and I didn’t have trouble reading those parts, because she says everything in way that makes you feel like you’ve been best friends forever.  I wish I had a friend like her in real life.  Brittany is so inspiring, so get the book, and follow her blog.  She is seriously amazing.  Buy this. Buy it for your mom, your husband, and all of your friends.  You will be doing yourself (and everyone else) a favor.

2 thoughts on “Fat Girl Walking: Sex, Food, Love, and Being Comfortable in Your Skin…Every Inch of It by Brittany Gibbons”